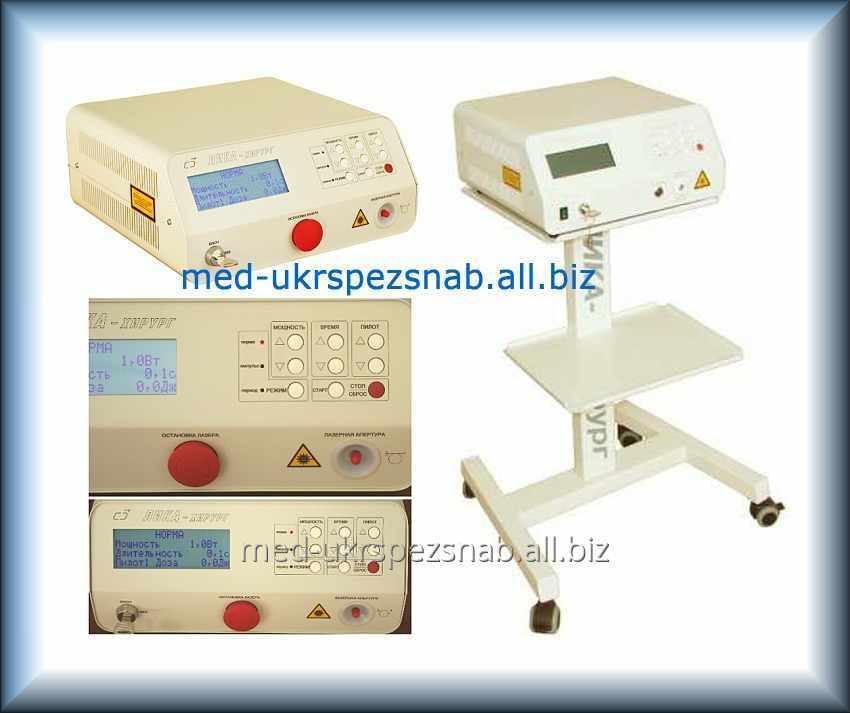 Coagulator laser universal Face surgeon
The device of "Face surgeon" is intended for carrying out a wide range of surgical manipulations which purpose is:
- vaporization (layer-by-layer removal) of biological fabrics;
- correction of a form and volume of healthy fabrics in the esthetic and medical purposes;
- providing hemostasis;
- coagulation of biofabrics;
- section of biofabrics;
- power thermotherapy.
Laser radiation can be used as independently, and to supplement other existing types of surgeries.
The device provides:
- step adjustment of power of high-intensity radiation;
- step adjustment of power of radiation of the laser pilot;
- installation and control of time of procedure;
- a possibility of work in the continuous and pulse modes of radiation;
- automatic calculation of a dose of radiation.
The laser coagulator of "Face surgeon" is made only with one wavelength of working laser radiation, at your choice of the values of lengths of waves presented in the table.
Modernization of earlier bought devices with increase of power of radiation is possible.
Advantages of application of a laser coagulator of "Face surgeon":
- The low-injury – the exact, strictly dosed influence of laser radiation provides the minimum damage of surrounding fabrics.
- A reliable hemostasis – due to coagulation of blood on section walls laser operations are almost bloodless that provides the fine review of the operational field.
- The Pretsizionnost – high precision of laser influence allows to control a damage zone.
- Sterility of a postoperative wound – laser radiation kills pathogenic microorganisms, preventing thereby development of purulent complications.
- Painlessness – laser operations are less painful for the patient, than traditional interventions; sometimes anesthesia is not required or enough only application anesthesia.
Dependence of absorption of laser radiation main chromophores
skin and blood of the person from wavelength
An important role in realization of laser technologies is played by a right choice of working wavelength of radiation as wavelength is the major factor determining depth of impact of the laser on biofabric. For increase of overall performance of surgeons the laser coagulator of "Face surgeon" has a wide choice of working lengths of waves, the most demanded in surgery. Dependence of absorption of laser radiation is given by the main chromophores of biotissues of the person from wavelength in graphics (Minayev V.P., 2009).
The most universal the "surgical tool" suitable for carrying out the majority of surgical interventions, is laser radiation with lengths of waves in the range of 940-990 nanometers. It is well absorbed as in water, and oxyhemoglobin and therefore optimum combines the cutting and coagulating properties.
Radiation with lengths of waves of 810 nanometers and 1,06 microns gets into biofabrics more deeply in this connection it can be effectively used for volume (on depth to 1 cm) warming up of biofabrics up to temperature of their coagulation that is necessary, for example, for thermotherapy of tumors.
Wavelength of 1470 nanometers is the share of an absorption maximum in water that causes its broad application in a flebologiya.
Very important point in preparation of the laser device for work is control of output power of laser radiation. Compliance of real indicators of power of radiation to the values specified on the display of the device allows to carry out all surgical manipulations according to the developed practical recommendations and with a bigger accuracy to predict the received result. For measurement and control of power of radiation devices of "Face surgeon" and "M Face surgeon" are in addition completed with the portable indicator of power IM-3 with a portable reception head. This device has autonomous food and allows to measure the power of laser radiation in wide spectral (from 400 nanometers to 10,6 microns) and power (from 0,05 W to 30 W) ranges.
For protection of eyes against laser radiation the set of delivery of laser devices of "Face surgeon" and "M Face surgeon" includes points lazerozashchitny. The optical density of glasses in these points provides reliable protection of eyes against the laser radiation of high power.
To surgical lasers we offer the following types of points:
- DH-SD-4 - points protect from laser radiation with lengths of waves in the ranges of 200-540 nanometers, 800-1100 nanometers.
- DH-SD-8 - points protect from laser radiation with lengths of waves in the range of 800-1600 nanometers.
For convenience of work with surgical lasers and the peripheral tool (nozzles, light guides) which is applied to it it is in addition possible to get a mobile little table under the device.
Guarantee for the device - 24 months