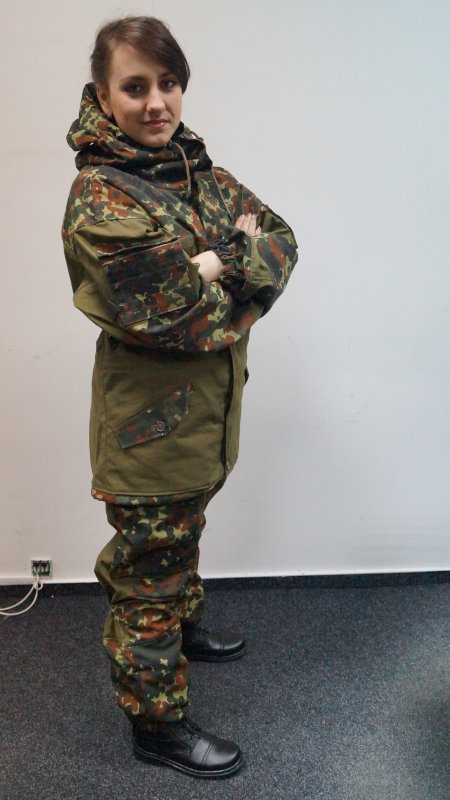 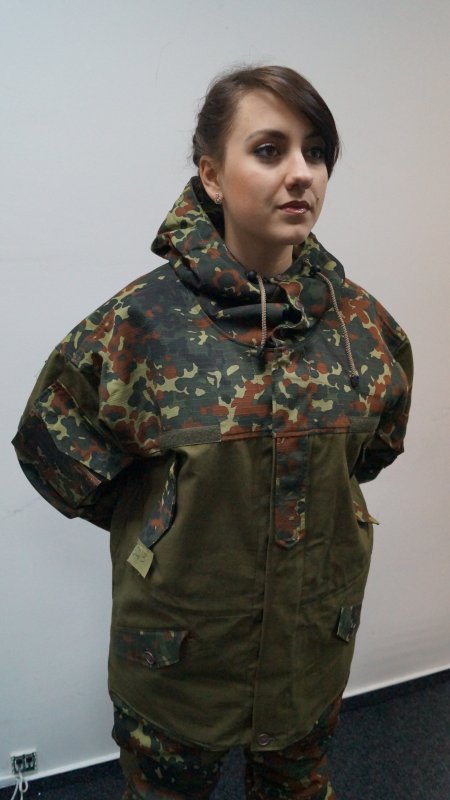 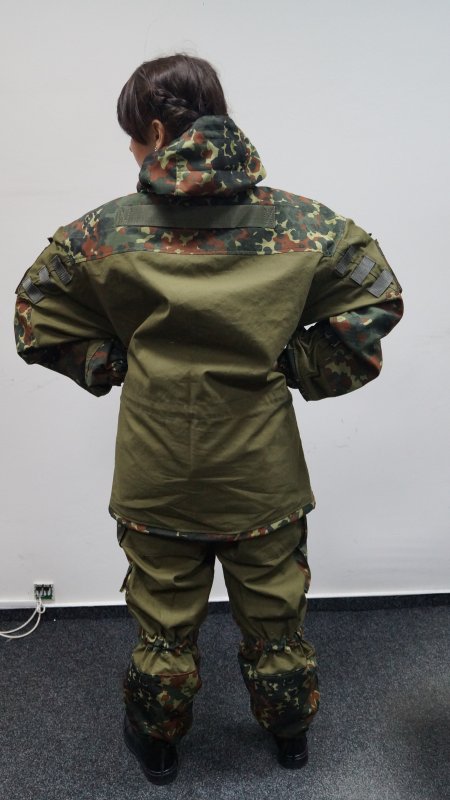 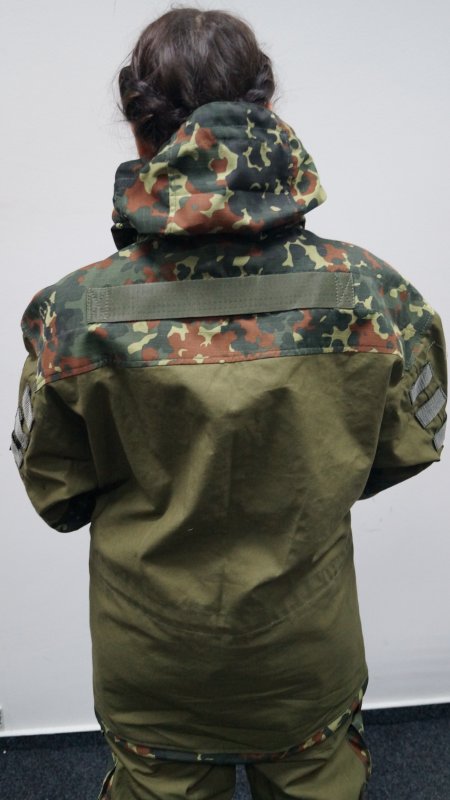 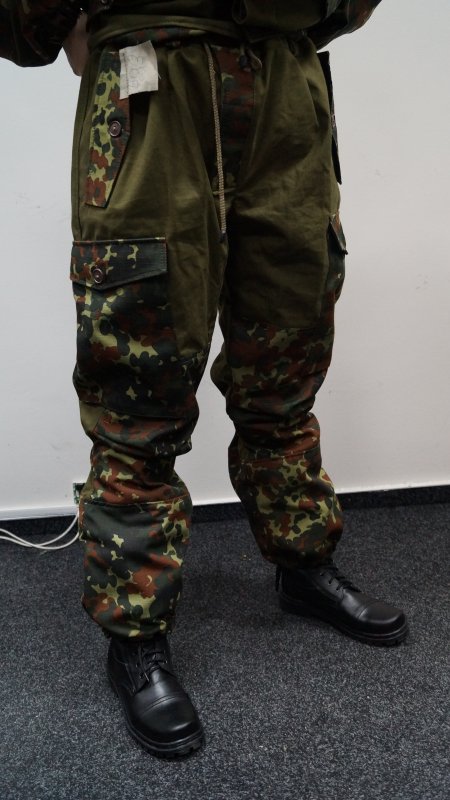 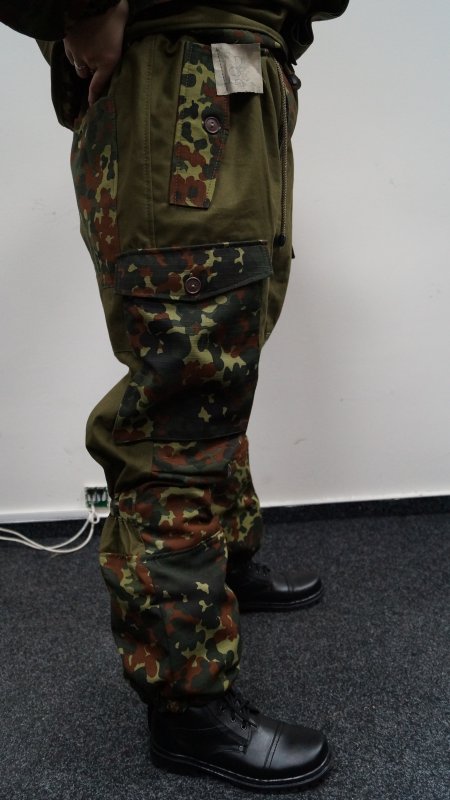 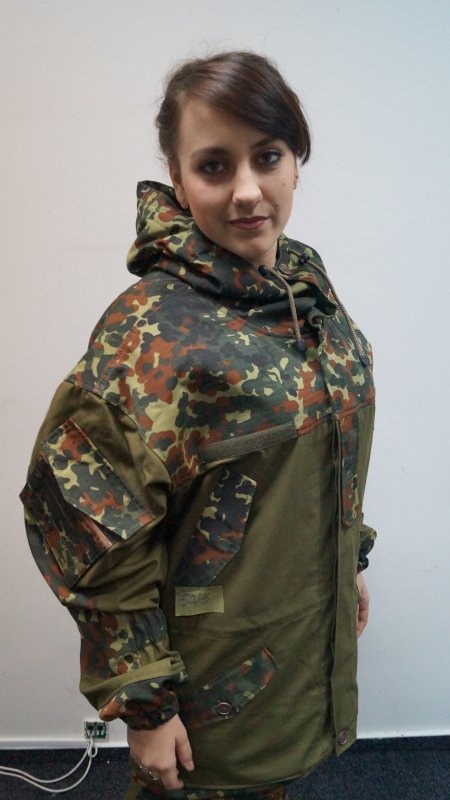 Mountain summer wind-shelter suit of new army coloring to the "animated cartoons" which are well masking in the conditions of the mountain and woody district. The suit "Hill "is intended to animated cartoons for protection against sharp differences of temperatures and strong wind in the conditions of the mountain and woody district. The set of suit includes jacket park and trousers. The jacket park of loose fit long to the middle of hips allows to hook, depending on season, under jacket additional layers of clothes. The volume of jacket is regulated by rubber-and-canvas band on each side on waist and cord in the coulisse of bottom. For the best protection against wind, the jacket is buttoned by buttons on two wind-shelter levels located from internal and outer side of the left shelf. Such arrangement of levels, completely "cuts" flow of cold air from any party. That buttons did not cling to equipment, the external level is closed by board of the left shelf. The hood is clasped on chin by the valve on buttons, equipped with visor and regulated on volume by cords in the scenes. The bottom of sleeves is regulated by rubber-and-canvas band. The jacket is sewed from closely tent cloth of 100% katon and amplifies on elbows the second layer of mixed fabric. On shelves lateral slash pockets with the dust-protection valves which are buttoned are located. That the valve quickly has not worn out, at frequent use of pocket, on lining there is mixed fabric. Trousers of loose fit, also as well as jacket park allow to put on additional layers of clothes. In order that free trousers did not "parusit" at strong wind, complicating the movement, under knees and below couplers from rubber-and-canvas band are located. Trousers are equipped with six pockets: two "portfolio", nabedrenny (with the valves which are buttoned), two back pro-carved with the valves, two lateral pro-carved, and also internal aprons boots filled in boots for avoiding of hit of sand and stones in boot. The belt of trousers is regulated on volume by cord, elastic band for pomochy. Trousers amplify the second layer of mixed fabric on a lap, behind and below. Places of suit, critical for wear, are strengthened.