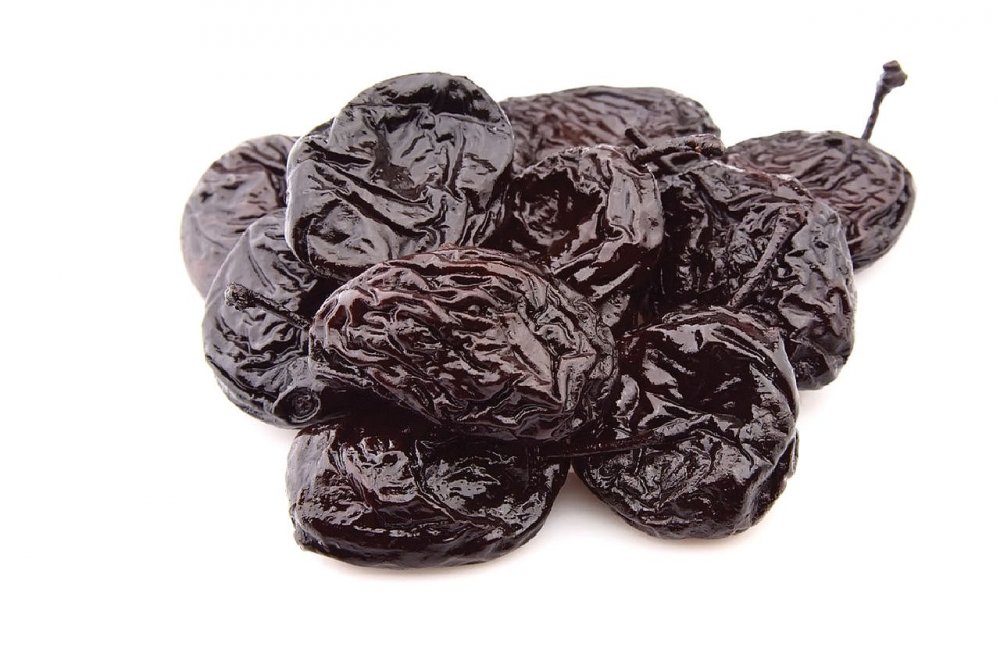 80% of positive reviews from 5
5
5 years on Allbiz
Technical characteristics
Description
Prunes are a dried fruit of plum of a grade "Hungarian". Only ripe and fleshy fruits with freely separating pulp are subject to drying. Previously fruits are blanched and processed by the boiling water then 8 - 10 hours at 80 degrees of heat in the steam dryer are cooled and dry. A certain marketing reception - for gloss giving prunes after sorting is processed by glycerin.

At most of people the word "prunes" by all means casts associations with a depletive. Do not forget also about useful properties. Prunes contain 230 calories on one hundred grams, 25 grams of water, 57.5 grams of carbohydrates, 2.3 grams of proteins and it is not enough fats. Prunes are rich with potassium (864 mg) and magnesium, also calcium, sodium, iron, phosphorus. As regards vitamins - here and C and PP, And yes Century.

Also prunes contain food fibers, organic acids and bioses. Big concentration of potassium improves water - salt balance that has only a positive effect on kidneys. Prunes are useful to hypertensive persons because it perfectly lowers pressure. It is enough to wet 4 - 5 fruits in hot water, after to cut and add to dry tea. Tea at preparation is drawn 10 minutes and later is used. Antibacterial action of fruits of plum slows down development of harmful bacteria.

Prunes are irreplaceable at digestive tract diseases. And yes, at locks. Do not grab tablets, eat 5 - 6 fruits instead. As prunes are enough kaloriyen, it is shown to the people suffering from anorexia, malnutrition and the general weakness. Prunes of manual drying (what was dried up on the sun) - the most useful, though it and in the afternoon with fire you will not find. "Factory" prunes korichnevat for the color, have a coffee shade as it was previously drenched with boiled water that means that the product lost in usefulness. "Manual" prunes differ in an equal shade with insignificant gloss and taste at it gives insignificant sourness. Just before the use wash fruit under a water stream as it is processed glycerin.

Many countries deliver prunes on the markets. But what, it is good chernosliviz Uzbekistan?

Here what tells, the producer of "NETiGO": "In a year at us nearly 250 sunny days. Summer - very hot. And what is necessary for plants? Of course, light and heat. Therefore our fruit and dried fruits are more sweet than any others". What tells the Internet: "As laying of fruit kidneys and a sakharoobrazovaniye in fruits it is connected with illumination of leaves, such escapes differ in bigger productivity and the increased sugar content".

Prunes of Uzbekistan are actively realized in the agromarket in the former Soviet Union. At the same time fruit of Uzbekistan in the past season were included into the three of the most bought, having outstripped production of Italy, Argentina, Morocco, China, Spain and the Republic of South Africa. "Agrarian and industrial complex inform: " notes vegetables and fruit that export of dried fruits to Russia in last season is estimated at 300 million dollars that for 47% exceeded an indicator of the previous season. At the same time import of dried fruits was absolutely insignificant. In a season of 2009 - 2010 Uzbekistan took the 6th place among the largest suppliers to Russia. The main article of export - dried fruits of Uzbekistan and kostochkovy, after table grapes and a melon with a water - melon. According to messages of REGNUM news agency, technologies of cultivation of undersized plants widely accustom to Uzbekistan. In 40 thousand farms on all republic nearly 15 thousand saplings of fruit trees and nearly 15 million shanks of grapes were planted. Average value of productivity - 93 centners from hectare. In general total area occupies 128 thousand hectares.