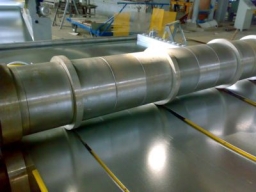 The equipment is intended for cutting of rolled metal rolling on tapes of the set width with winding of the strip in rolls. Range of thickness of the processed metal: 0,4 - 3,0 mm (depending on model). Models exists a little, distinctions in the range of thickness, and as a result, designs and costs.

Razmatyvatel of a roll - the device is intended for unwinding of a roll of metal. Our plant makes several models of console razmatyvatel, all of them are equipped with the mechanism of control of a loop of the tape and automatic equipment allowing to operate flexibly the electric drive (to smoothly start and stop rotation of a roll, the reversive movement and so forth). The maximum loading capacity - 10 tn.

Disk scissors of longitudinal cutting of metal on the strip, are installed on one frame with a filling table, allows to dismiss a leaf on strips in number from 2 to 14.

The compensation table allows to work without use of a hole. Different length of cut tapes arises for a number of reasons (a metal raznotolshchinnost, various effort of a clip before winding), cut strips will have different sagged which size will increase depending on number of the cut running meters.

The device which is reeling up with a divider of two - basic type provides dense and equal laying of strips in a roll. The directing devices provide winding of bays with the minimum teleskopichnost. The clip, a pull of guides is made by means of pneumatic cylinders. I will eat measured bays of the cut - out strip with the bearing mandrel of the device which is reeling up the crane beam, or other mechanism of the corresponding loading capacity is made with the help. The station of a tension is intended for creation of effort of a tension when winding a tape (for ensuring density of winding). The device represents the namatyvatel integrated into a frame a design of plates with clamping pneumopillows. Management of effort of a clip is made by pressure regulator. The effort of a clip from pneumopillows is transferred to a tape through felt laying which provides protection against damage both a tape, and pneumopillows.

Kromkonamatyvatel is intended for winding of cut edges in hanks. Theoretical maximum weight of a hank of scraps of 200 kg. The device is equipped with the drive, the speed of winding is coordinated with cutting speed in the line by means of the safety frictional coupling.

Control system providing the following functions of work of the line;

- ensuring raznotsiklichny operation of the drive of the device unwinding on delivery of preparation for the subsequent giving to scissors disk;

- ensuring operation of the drive of scissors disk with a constant speed;

- ensuring operation of the drive of the device which is reeling up with a variable angular speed, way of regulation of frequency of current the inverter / the frequency Control of the Frequency Converter converter to be made manually from the main control panel.