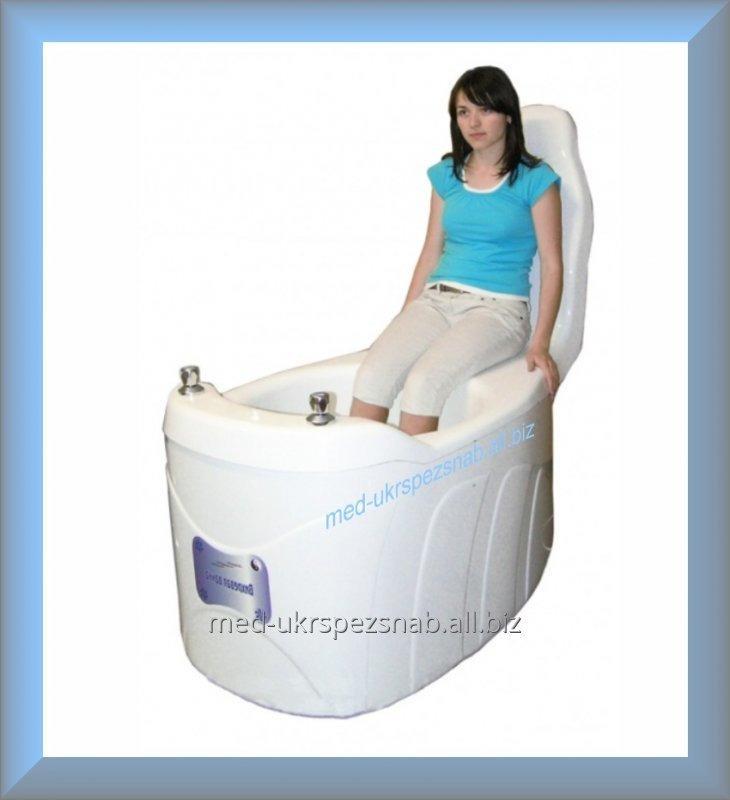 Vortex hydromagnetotherapy (VGFMT) in the medical and improving purposes with use of the combined hydrobathtub for legs.

KUPAVA is the unique device allowing to influence at the same time a vortex water stream, radiation of red color and constant magnetic field shins and feet of legs.

The possibility of magnetolight (laser) impact on a crotch is in addition provided during the hydroprocedure, i.e. magnetolight devices are built in in sitting of a bathtub.

Feature of improving and medical procedures of the combined hydrobathtub Kupava are as follows:

The lower extremities are affected by a vortex water stream of a certain power and temperature which depending on parameters can have the toning, harmonizing or sedative effect;

The permanent magnets which are in addition built in in a bathtub structure water and such water together with magnetic fields renders powerful magnetotherapeutic effect;

Photoactivators are located in a bathtub in such a way that they can stimulate the most important zones (biologically active points) of foot and a shin and consequently, to render improving and medical effect;

Also the possibility of installation of magnetophotostimulators in sitting of a bathtub is provided in a hydrobathtub design Kupava that allows along with the hydrophotomagnetoprocedure for legs to influence a zone of a crotch, a tailbone, a rectum, etc.

The vortex hydrophotomagnetic bathtub provides performance of massage of gastrocnemius muscles and a foot of legs with a vortex water stream, influence by the optical radiation of red color and constant magnetic field. The vortex stream is formed at the expense of the round form of a bathtub and special nozzles located on each side bathtubs. The basis of action of a vortex bathtub is made by a combination of mechanical, temperature, optical and magnetic irritants. When using mineral water the chemical irritants caused by difficult scale of various mineral salts, gases and minerals join them.

Normalization of a tone of muscles of the lower extremities, "removal of fatigue of legs", increase in the general working capacity and resistance of an organism to diseases;

Improvement of a krovenapolneniye of legs and its regulation due to change of parameters of influence (temperatures, capacities light and magnetic water, time of the procedure, an aktsentuirovka of zones of stimulation, etc.);

Improvement of a limfoottok and limfoobrashcheniye in the lower extremities, bodies of a small pelvis and organism in general;

Improvement of function of the central and peripheral nervous system;

diseases of the musculoskeletal device;

chronic diseases of the urinogenital sphere;

Application of vortex hydrophotomagnetic bathtubs at the polineyroangiopatiya (for example, diabetic) obliterating is especially effective

the general contraindications for a holiday of balneological procedures;

violation of integrity of an integument of legs;

varicosity of the II-III stage.

Induction of magnetic field of a permanent magnet, mtl - 38;

The number of photoactivators, piece - 8;

Power of an optical stream of the photoactivator, MW - 100;

Wavelength of radiation of the photoactivator, nanometer - 627;

Range of frequency of modulation of optical radiation in the working range of temperatures from +10 to +35 °C, Hz - 0,5-7;

Degree of protection against defeats by electric current – the Class 1 (demands grounding).